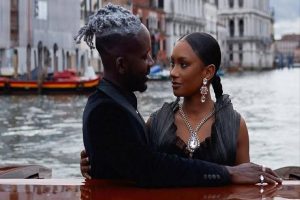 Banku music pioneer Mr Eazi has identified only two musical acts he want at his wedding.

It may just be Mr Eazi’s way of telling his fans that he was yet to tie the nuptial knots with his fiancée, Temi Otedola.

A couple of days ago, s he got them confused in an interview with Susan Pwajok where he claimed that he could just have hitched legally with his beau without anyone knowing.

This, the Ghana-based singer noted, was possible because he’s naturally a reserved person with his fiancée, who love to keep their affairs and family away from the public.

In an apt Twitter thread, Mr Eazi said he only desires to have the veteran R&B and pop musical group / quartet, Styl-Plus at his wedding.

On a second thought, he noted he’d love to have widely celebrated singer, 2Baba also.

“Abeg na only Style Plus I want for my wedding.

The FG says whatever action taken against… END_OF_DOCUMENT_TOKEN_TO_BE_REPLACED