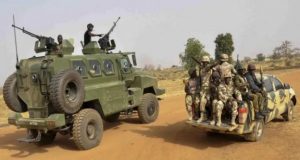 The chief of army staff, Farouk Yahaya, flagged-off the exercises at the Nigerian Army 6 Division Step-up Headquarters in Ahoada, Rivers.

According to him, the operations were specifically formulated to meet the unique security challenges in the various geopolitical zones.

“The exercise will involve all security agencies, so that we can effectively defeat the threats across the zones.

“Each of the exercises will address security challenges peculiar and unique to the areas of responsibility.

“The exercise here (South South) will among other things address the issues of oil theft which has become an enigma here,” he said.

Mr Yahaya said the operations would also checkmate other security challenges like banditary, cultism and kidnapping in the four zones.

“The troops will be deplored in areas where they operate. Considering that they have knowledge of the area, they will be better placed to address the security issues.

“The ones here (South South) are better placed to know the creeks where oil theft takes place, and deal with them decisively.

“At the end of the exercises, we hope to have set conditions for a more peaceful atmosphere for the conduct of 2023 elections,” he added.

Earlier, the chief of army operations, Tunde Akinjobi, said the exercises would involve both kinetic and non kinetic approaches to effectively check crime and criminality in the areas.

Mr Akinjobi, a major-general, said that Exercise Enduring Peace would operate from headquarter commands in Benue, Kogi and Nasarawa states as well as the Federal Capital Territory.

“All participating formations have been involved in series of participatory activities which culminated in the tactical exercises with our troops,” he added.

The FG says whatever action taken against… END_OF_DOCUMENT_TOKEN_TO_BE_REPLACED