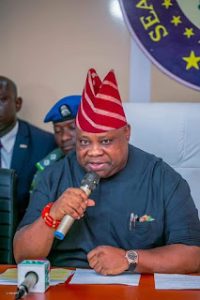 Governor Ademola Adeleke of Osun State has vowed to probe his predecessor, Gboyega Oyetola on the debt profile of the State.

He said the State is indebted to the tune of N407.32 billion if the N72 billion debt on salaries and pension arreas are added to the total loan stock of N331.32 billion.

The governor state this on Thursday during a meeting with the council of Obas presided over by the Ooni of Ife, Oba Adeyeye Ogunwusi.

Reeling out the blow by blow account of the State’s debt profile, governor Adeleke said the former governor “must explain how the N331 billion borrowed in the name of Osun State was expended, with no obvious Infrasructural development to justify this huge debt.”

He added “Governor Oyetola must explain how the N18 billion Bridge Loan taken after he lost election on July 16,2022, was expended.

Governor Adeleke who also accused the immediate past administration of taken loans from commercial banks, questions such loans given beyond its administration lifespan.

He said “The creditors, especially the commercial Banks must explain why various loans were given to an administration beyond its 4years tenure. The 28 years is equivalent to the tenure of at least four governors. A child that is born today would have earned a PhD at 28 years of age.”

Responding, the chairman of Osun Council of Oba and the Ooni of Ife, Oba Ogunwusi commended the governor for bringing the matter before the traditional rulers.

He however urged the governor to avoid distractions and face governance as much as he’s trying to ensure accountability, a position that other traditional rulers also shared.

Speaking, the Oluwo of Iwo, Oba Abdulrasheed Akanbi who differed in his opinion said he would not dispute the figures that were reelled out but still not aversed to accountability but he doubted if Oyetola would be culpable.

He said “I would not support the opinion that the governor should not look into those figures as presented to him by the Account General of the State. There must be accountability as this would help to know whether it is true or false. But for me, I don’t think and I don’t believe Oyetola can do such things”.

The FG says whatever action taken against… END_OF_DOCUMENT_TOKEN_TO_BE_REPLACED