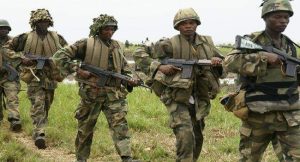 Over 20 terrorists have been reportedly killed and five kidnapped victims rescued after five hours of clearance operations by a joint task force troops in Munya local government of Niger State.

The operation took place at Gaskiya Bana, a border village between Niger and Kaduna states in Munya Local Government of Niger State.

It was gathered that the kidnap victims have been held in captivity for over a month. The bandits were also said to be lieutenants of terror kingpin Alhaji Leyi, who operates in Gaskiya Bana in Munya Local Government Area.

While confirming the operation, the state commissioner for internal security and humanitarian affairs, Emmanuel Umar, disclosed that the terrorists abandoned their victims and looted items during the raid.
He added that the troops ran into an ambush by the terrorists at Unguwan Aboki but were able to repel them as scores were killed and others were forced to retreat.

Those rescued, according to Mr Umar, are Yakubu Abuba, Susan Sunday, Patience Sunday, Lazarus John, and Bulus Yahaya.
He added that all the victims were abducted from Chukun village in Kaduna State about a month ago.

“All the victims have been debriefed and since reunited with their families after medical examination,” he said.

He commended the efforts of the security agencies and other stakeholders in mitigating the spate of terrorist activities in the State.

The FG says whatever action taken against… END_OF_DOCUMENT_TOKEN_TO_BE_REPLACED